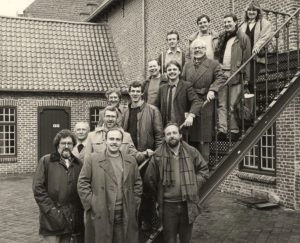 The first foreign outing of the newly formed British Guild of Beer Writers in 1988, where the idea for the first Good Beer Guide Belgium was born.

After nearly 30 years, world-renowned beer writer Tim Webb has stepped down as author of the Campaign for Real Ale’s Good Beer Guide Belgium.

Tim’s last edition of the Good Beer Guide Belgium will be released on 16 April, but is available direct from the CAMRA shop now. Considered the indispensable companion for anyone visiting the country, it is packed to the brim with information on Belgian breweries, beers and bars and features comprehensive advice on getting there, what to eat, where to stay and how to bring the best of Belgium’s beer offering back home with you.

The Guide was originally born from late-night conversations with fellow beer writers Michael Jackson and Roger Protz – former editor of the UK Good Beer Guide. Designed to be a short pamphlet for beer travellers, it has since turned into the global authority on Belgium’s beer and cafe scene.

The very first Good Beer Guide Belgium listed under 100 Belgian breweries and 160 beer cafes, while the latest edition boasts 245 breweries and nearly 800 places to drink, as well as including Belgian beer bars in 25 countries around the world, and guiding visitors to Belgian cuisine, its beer festivals and its best small hotels.

Author Tim Webb says: “It was a quirk of fate that had me writing this book in the first place, and over the years I – along with the rest of the world – have fallen in love with Belgium’s beer scene.

“Three decades on, it looks like one of the best beer-making nations on earth has finally been acknowledged for its skills, with Belgium’s breweries achieving global fame. I plan to hand over the mantel so that I can become a user of the guide and have more time to enjoy the fantastic range of beer cafes in Belgium.”

On top of his long standing editorship of the Good Beer Guide Belgium, Tim has put his expertise towards other brew-oriented books such as the World Atlas of Beer, Pocket Beer Book, LambicLand and 100 Belgian Beers to Try Before You Die!

The eighth edition of the guide is sponsored by Beer Merchants, who have been importing amazing, small batch Belgian beers since 1979.