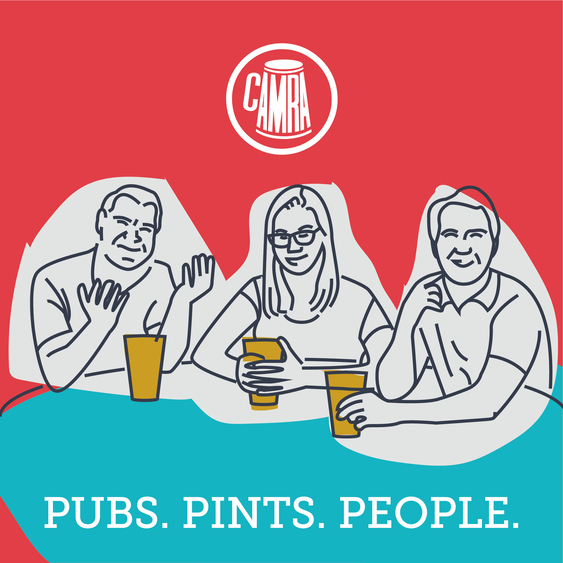 Tune in on Apple Podcast and Spotify

A new episode will be released each week on Apple Podcast and Spotify or you can tune in via our Acast channel below! Don’t forget to also follow us on Twitter @PubsPintsPeople

Help us help pubs and breweries in the UK by supporting the show! All donations received will go towards CAMRA’s campaigns to support the industry during this difficult time.

You can make a one-time donation of your choosing whenever it’s convenient to you. 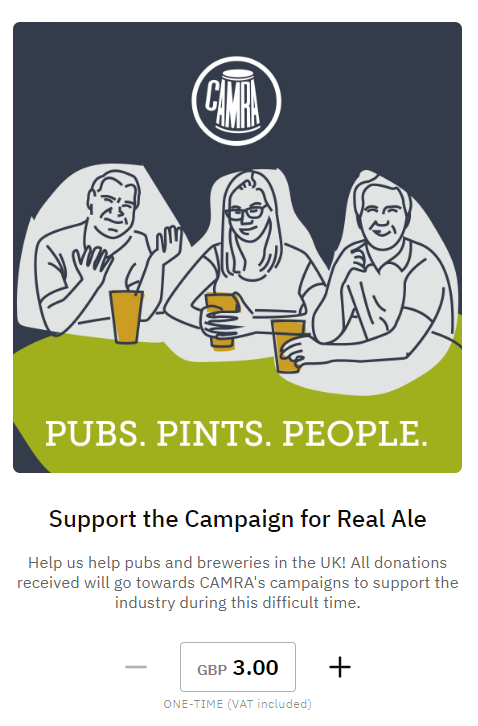 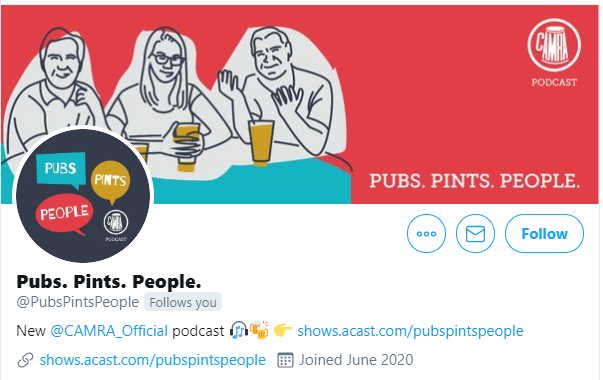 The Campaign for Real Ale’s new podcast Pubs. Pints. People. brings you interesting stories each week about the world of beer, cider and pubs. Tune in every Tuesday with hosts Katie Wiles, Ant Fiorillo and Matt Bundy as they chat to special guests and learn about beer writing, brewing jobs, cider making and more. Each episode includes a ‘dive’ into CAMRA’s 50-year archive and a beer and food recipe, courtesy of food editor Sue Nowak.

There are a lot of jobs in brewing aside from making the beer. Sit down with David Bremmer from Robinsons Brewery to find out how they got a band like Iron Maiden to collaborate with them, and Ben Watson, sensory test lead at Beavertown Brewery.

Episode 2 – All about beer writing

Learn all about the art of beer writing with legendary beer writer Pete Brown and Roger Protz.

Learn all about real cider and perry as we speak to cider producers Tom Oliver and Susanna Forbes as well as Cider Museum Director Elizabeth Pimblett.

Hear from the women changing the face of the brewing industry as we sit down with Jane LeBlonde of Mothership Brewing and Annabel Smith, co-founder of Dea Latis.

Learn all about beer and pub heritage as we sit down with Beer Noveau to learn about heritage recipes and Geoff Brandwood who will talk about CAMRA’s pub heritage campaigns.

Improving diversity in beer has been a big topic in recent years. We will sit down with Ignition Brewery about how they’re actively recruiting people with learning difficulties to work in the brewery and also Emma Inch, beer diversity champion and multi-award winning broadcaster.

Homebrewing is booming during lockdown – let’s find out how to brew our own with Homebrewtique founder Claire Russell and former homebrewer turned professional, Andy Parker of Elusive Brewing.

Join us as we learn about sours, foraging for ingredients and mixed fermentation with the Little Earth Project and Adnams Brewery!

Episode 10 – Diving into the history of CAMRA

In light of CAMRA’s 50th fast-approaching, we’re sitting down with Laura Hadland, author of the CAMRA biography due to be published next year, and one of the four original founders, Bill Mellor.

We’re sitting down with two brewpubs to talk about how lockdown has affected them – The Hand in Hand in Brighton and the Hail to the Ale pub in Wolverhampton.

Join us as we learn about American brews and the power of hops by chatting with Lotte Peplow, Craft Beer Ambassador for Europe from the Brewers Association, and Tom Fozard, Roosters Brewery.

In this special one-off footnotes episode to celebrate pubs reopening on the same day as Independence Day, Katie sits down with Pop Culture Brews for an extended interview on American vs British beer.

We’re learning all about eco-brewing and sustainable initiatives by sitting down with Purity Brewing and Farr Brew.

Katie, Ant and Stella will be learning all about cooking with beer as well as beer and food pairings. They’ll be sitting down with Melissa Cole, author of The Beer Kitchen, and Runaway Brewery in Manchester, which is well known for the exciting beer pairings.

We will be chatting about experimental brewing methods – like Ora’s Tiramisu stout and limoncello IPA – and how that compares with traditional brews such as Timothy Taylor’s landlord.

We are sitting down with Channel 4’s Beer Expert Mark Dredge to discuss cooking veggie and vegan dishes with beer, along with Phil Saltonstall from Brass Castle Brewing who will chatting about their range of vegan and gluten-free beers.

We sit down with John Clarke, Chairman of CAMRA’s Stockport and South Manchester branch who talks us through the different types of Belgian beers out there. We also get to speak with Tim Webb, author of the Good Beer Guide Belgium and dive into the archive to learn a bit more about monastery brewing from the late Michael Jackson.

We’re talking about pub as the original grassroots venue for live music. We sit down with Bev Whitrick from the Music Venue Trust along with the award-winning live music band the Harp & Monkey.

We sit down with Rudi Keyser from Watling St Beer and Clare Chater from Barts Charity and how they have worked together to create a charity beer. We also chat with Alan Mann at Brewgooder about their initiative to fund access to drinking water across various projects around the world.

Join the team as they speak with the legendary Roger Protz about his new book, The Family Brewers of Britain, and Stuart Bateman of Bateman’s Brewery. They also get a chat with Albert Johnson from Ross-on-Wye Cider and Perry Co to hear what it’s like to be a family cider producer. 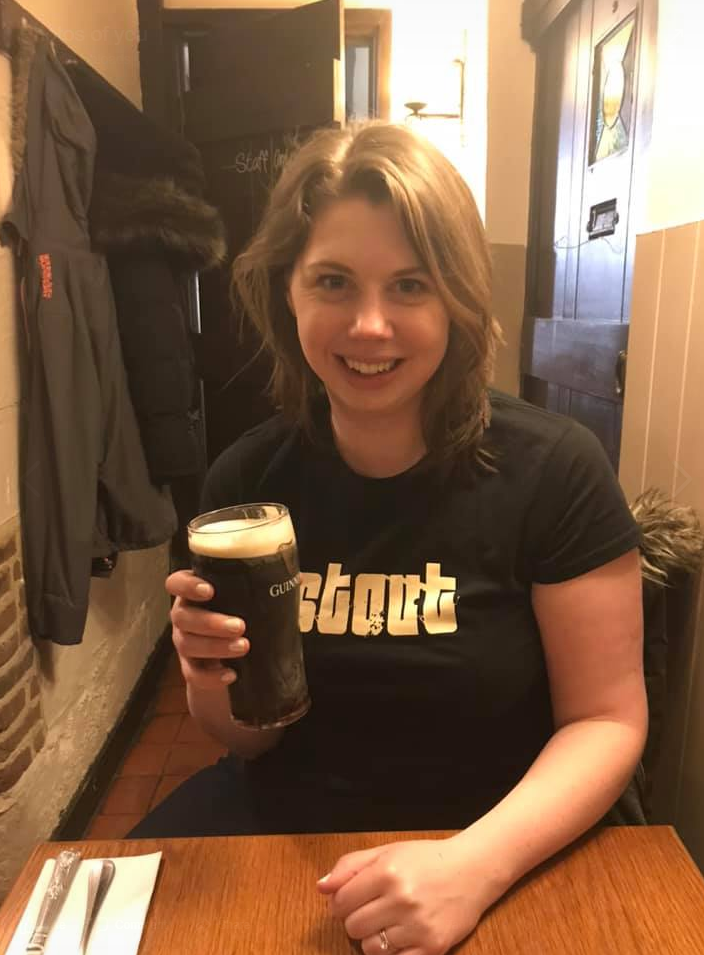 Katie is the podcast producer and also heads up the communications department at the CAMRA head office. She’s been working at CAMRA – first in the campaigns team and later in comms, for over five years. An enthusiastic beer drinker, she also sits on the Board of Directors for the British Guild of Beer Writers and occasionally blogs and writes about beer for CAMRA’s BEER magazine. 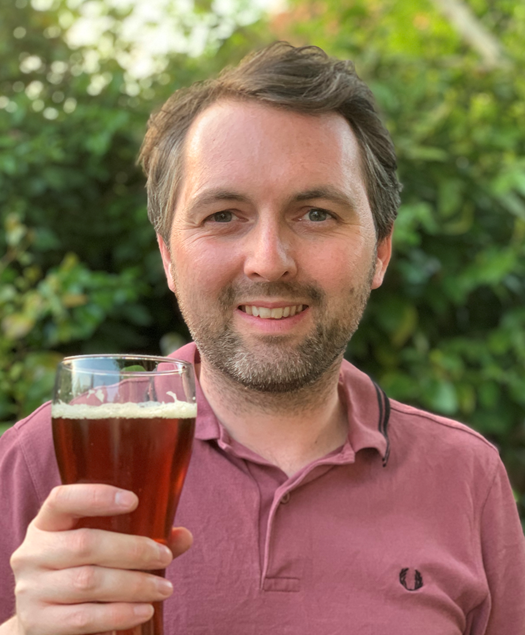 Matt is a proud member of the Mid-Chilterns branch who discovered CAMRA at his local pub, The Rising Sun in Berkhamsted, where he enjoys nothing more than a good pub quiz over a few local ales. He is originally from Cumbria and takes regular pilgrimages to stock up on ales from his home county. He is the podcast’s cider aficionado and is currently trying his hand at making his own home-grown cider, with mixed results. When not down the pub he works in comedy television and has turned his hand to stand-up comedy, also with mixed results. 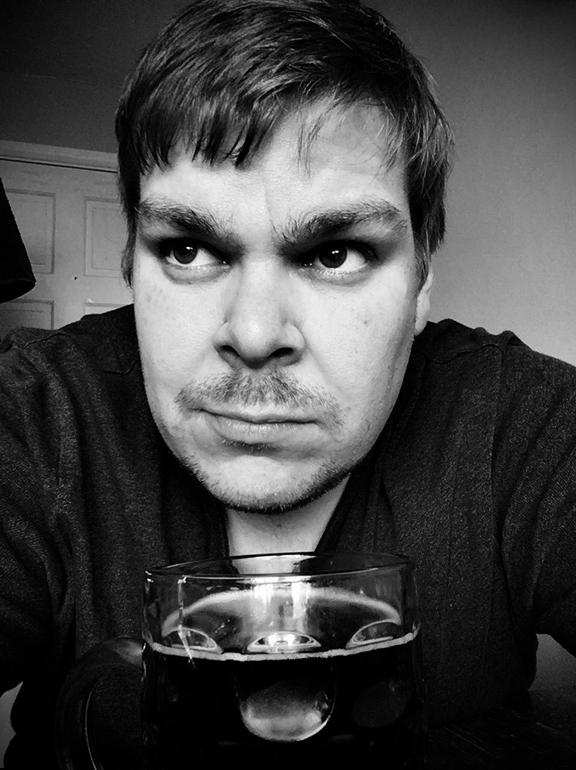 A Northerner at heart, Ant moved to Bedford after his job bought him down to the South East. While real ale and craft beer is more commonplace across the world nowadays, Ant didn’t really get his thirst for the drink until he settled more permanently in the UK – A brief introduction to a variety of ales on a pub-crawl one afternoon signalled a final farewell for the ‘fizzy stuff’!  These days, Ant enjoys a more relaxed pace of life with his wife and son in the leafy suburbs.  While he’s far from a seasoned ale drinker, joining CAMRA has allowed him to indulge his passion for socialising, enjoying a decent pint and now even bring back some of that entertainer he left overseas to our very own Podcast.  You’ll often hear Ant before you see him, but he’s always ready to share something delicious with anyone he meets.

Check out the below for all the latest.

Do you have an interest or skill in script-writing, editing, producing or hosting? We need volunteers to help get season two off the ground! Get in touch to register your interest and join the team for season two!

"Brewing is based in science, but there’s a lot of freedom within the brackets of what beer is. You have that artistic freedom and licenses to create what you want.”

“If somebody wants to become a beer writer then do a blog, write away and just hope that people pay attention to what you’re saying.”

“The term craft beer has been co-opted by bigger breweries now, but I talk about flavour first – people designing recipes, designing beer they want to drink, taking great care and attention to detail with it.”