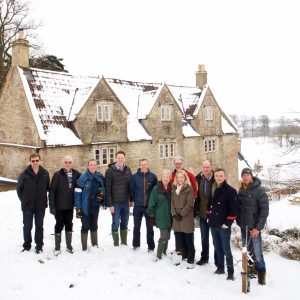 Campaigners in Somerset who saved a 150-year-old village pub from closure have been awarded CAMRA’s prestigious Pub Saving Award, recognising the communities that work hard to keep their beloved locals open.

The Save the Packhorse Project was set up by residents of South Stoke, Bath, in May 2012, in response to the much loved Packhorse Inn being sold to new owners, who planned to convert it into a residence with ground floor office space. By the end of May, the Save the Packhorse Project had acquired the support of Bath and North East Somerset Council, achieved national news coverage, and secured backing from nearly 1,500 signatories on an online petition.

In February 2013 after a wave of local support and campaigning, the Packhorse Inn was added to the Council’s Assets of Community Value list, giving the local community six months to raise funds to buy it.

The community organised a Save the Packhorse pop-up bar in South Stoke in May 2013, which has become a well-attended annual event with entertainment, flowing drinks, and press coverage.

The Packhorse Inn, now the property of 430 shareholders, was successfully reopened as a community pub in March 2018, after undergoing huge renovations to the building – it is estimated that more than 1,000 hours of volunteer time were allocated to the garden alone. During the course of its renovation, an original 17th century fireplace was discovered inside the pub, harking back to the building’s long history. Local historians estimate the inn’s founding to 1618 – meaning it reopened its doors exactly 400 years since its earliest days as an ale house.

Dom Moorhouse, Managing Director of the Packhorse Community Pub, says: “We’re absolutely delighted to hear the news that we’ve won the Pub Saving Award. It’s really a testament to our visionary, generous shareholders and the hundreds of volunteers who have helped make the project a reality.

“It’s really hard work, doing what we’ve done, and it’s so rewarding for everyone involved to not only have a great community asset but also be recognised for our achievement as a team.”

Paul Ainsworth, who organises CAMRA’s Pub Saving Award, adds: “The Packhorse Inn was unanimously selected by our judges as the winner of CAMRA’s Pub Saving Award. I have followed their story closely and with interest – it really is inspirational stuff! I hope that success stories such as this of the Packhorse Community Pub encourage other communities to fight for their local pub. The Packhorse has served the village of South Stoke for centuries now – to have lost it would have been devastating, and I am delighted that the team have been rewarded for their unyielding persistence and effort.”

The runner-up in the competition was the Volunteer Pub in Bexleyheath, which closed in late 2017 after 152 years of service as a public house. Saved by local campaigners, the pub was reopened in April 2018, and has established several football teams, an active golf society, and regularly promotes live music with Open Mic nights and acoustic guitar sets.