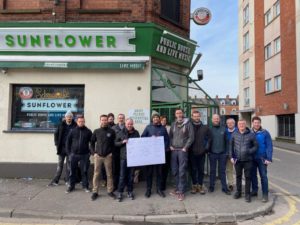 Small brewers from across Northern Ireland have come together to call for changes to outdated and unfair alcohol laws which prevent them selling beer directly to the public.

Meeting in Belfast on Monday (27 January 2020) the 11 brewers discussed forming a new campaign group to make the case for independent beer in Northern Ireland. They are being backed by the Society of Independent Brewers (SIBA) and the Campaign for Real Ale (CAMRA).

Recently the Department for Communities conducted a consultation seeking views on the current liquor licensing laws. Unlike brewers in England and Wales they cannot easily open tap rooms or brewery shops, sell beer at events or online directly to the public.

While small independent brewers on the other side of the Irish Sea have benefitted from the craft beer revolution, NI has been disadvantaged. Currently small brewers in NI have to involve a costly third party to sell their beer or obtain a public house licence at an eye watering sum – something small businesses simply cannot afford.

“Until 2010 there were only two small independent breweries in NI, now we have over 30 brewers with a common goal – to offer the choice and variety consumers want. We would like to see the law updated to reflect this change, to allow us the same opportunities as other small brewers in the UK, to grow our businesses and create jobs and to remove the barriers that put us at a disadvantage in our own market.”

“We’re fully behind these brewers who are making the case for independent beer in Northern Ireland and urge the newly formed Executive to bring forward legislation to change these outdated laws.”

CAMRA’s Northern Ireland Chair Ruth Sloan said: “The current licensing laws are a barrier to the growth of small breweries and tourism. It means that beer drinkers, including many CAMRA members, can’t enjoy a local real ale at the brewery or order them online. We support small brewers in Northern Ireland and would like to see changes to the law.”