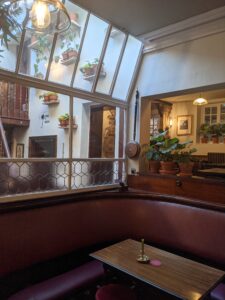 A small town-centre pub in Macclesfield has been named joint winner in the Historic England Conservation Award – recognised in the highly acclaimed Pub Design Awards, organised by the Campaign for Real Ale.

The Historic England Conservation Award recognises projects which successfully combine the retention and conservation of the architectural features which give a pub its historic significance, with the careful introduction of changes which will ensure it survives to serve future generations of customers. When it is done well, ‘constructive conservation’ means that it can be hard to spot the join between what is original and what is new.

The Castle, Macclesfield had been closed since January 2015 when acquired by the current owner, Branching Out Two Ltd DCPS, and was in very poor condition. A leaking roof had caused the partial collapse of one of the most impressive features, the ornate ceiling in the front lounge. Work commissioned from a historic building consultant identified the front part of the pub as being of especial significance. Consent was obtained for the creation of additional accommodation at the rear of the building, including a new Upper Lounge.

Historic features throughout, including the missing sections of the ceiling of the front lounge, were carefully repaired and replicated by the company’s team of skilled craftsmen.  Rewiring, a new heating system and the rebuilding of a previously unsupported chimney were also necessary whilst leaving original features undisturbed. Expansion of the accommodation for the public, alongside maintaining the feel of the historic core of the pub, has given a new lease of life to a building that was apparently destined for permanent closure.

Mr Tim Broster, from the company, said, “Many people were worried that the pub was lost forever, and that the condition it was left in would deteriorate so significantly that it would be impossible, or financially unviable, for anyone to restore it. Yet we have worked slowly and meticulously to sensitively repair the pub.  When we re-opened, it was clear that the work was overwhelmingly well-received, and the pub has returned to its former popularity. That feedback – and this award – is a real testament to the care and attention to detail of the builders who undertook the work and the part input from Mark Allison of Fifty Eight Five Five design consultants.”

Andrew Davison, chair of CAMRA’s judging panel said: “Once again, the awards underline just how varied Britain’s pubs are, and we have had a hard job in selecting the winners from the entries submitted. Amongst the award winners, we have new pubs, old pubs, urban pubs, rural pubs, elegant old inns, elaborate Victorian ‘gin palaces’, and inter-war pubs. There was a concern that pub owners would suspend work on their buildings during the pandemic, but quite a few seem to have taken the opportunity of enforced closure to plan and carry out repairs, restoration, and improvements.