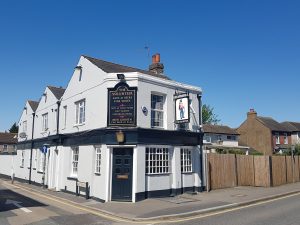 Campaigners in Bexleyheath, London, have been announced as the runners-up in CAMRA’s prestigious 2018 Pub Saving Award, which recognises communities that save their beloved local pub from closure.

The Volunteer Pub came to the attention of the local CAMRA branch and competition judges after the local community stepped in to purchase the pub following its closure in November 2017, due to financial difficulties. It had been a public house since 1865, and was one of thousands of pubs around the country set up to recruit volunteers for the armed forces.

Many of its locals were disappointed at the loss of the “Volly”, as it is affectionately known, and after making enquiries in January 2018, found it would be possible to purchase an initial six year lease. Fourteen investors were found and a total of £100,000 was raised to form the Limited Company needed to save the pub.

The team, led by Directors Mike Regan and Billy Tumelty, made use of advice from experienced pub landlords and CAMRA in pursuing their aim, and Greene King have been adopted as the pub’s main suppliers and are very supportive of the endeavour. Through sheer hard work, the pub reopened in April 2018, after volunteers helped the pub live up to its name and worked hard to clear out the garden and garages, rewire the building, repair the heating, replace the cellar’s air-con and flooring, and redecorate entirely.

The Volunteer Pub’s new aim is to provide quality cask ale, live music and a friendly atmosphere. They support local charities such as Greenwich and Bexley Hospice, raising £3,000 for them so far, and use local businesses and trades wherever possible. The pub has also established several football teams, including boys’, ladies’ and men’s veteran teams. They have an active golf society, and regularly promote live music with Open Mic nights and acoustic guitar sets.

The Volly Press Officer and Events Co-ordinator David Brigly says: “It’s been a challenging first year, but when the pub is buzzing with the friendly atmosphere it has been worth every minute. We are looking forward to increasing our range of real ales and community involvement and living up to our motto.”

Paul Ainsworth who organises CAMRA’s Pub Saving Award says: “The Volunteer Pub has a great story, and its survival is testament to the hard work and dedication of local volunteers. I congratulate them all on such a wonderful effort, and am delighted that they are runners-up in the Pub Saving Awards 2018. The standard of quality has been really high this year, and this is a fantastic achievement.”

The Volunteer Pub was pipped to the post by South Stoke community pub The Packhorse Inn, which was saved by 430 shareholders. The building housing the Packhorse Inn is believed to have been used as an ale house as early as 1618.