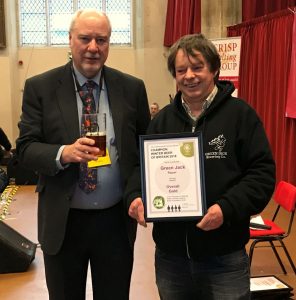 Green Jack Brewery, which is local to the festival and based in Lowestoft, Suffolk, is now one of the largest breweries in East Anglia and winner of multiple real ale awards. It’s Ripper brew is a well-known winter favourite, having taken home the Champion Winter Beer of Britain award in 2007 and securing silver last year.

Following over a year of local tasting panels and regional heats leading up to the finals, Ripper was described as a “sweet and warming beer with soft and fruity complex flavours” and “dangerously drinkable” by the judges.

Tim Dunford from Green Jack Brewery says: “It’s absolutely brilliant that we have won this award for the second time, I’m overwhelmed! We really love our strong beers and used to travel to Belgium all the time when we first got into the industry – I fell in love with the style and we have gone on from there.”

Nick Boley, CAMRA’s National Director responsible for the competition, says: “The standard of the competition was higher than previous years, and the judges were impressed with the quality of all the beers that made it to the final but Ripper from Green Jack Brewery was a clear winner.”

The Champion Winter Beer of Britain competition provides an opportunity to showcase the best traditional winter brews in the country, ranging from barley wines, strong old ales, porters and stouts.

All three of the beers will be available to sample at the Great British Beer Festival Winter, along with a huge range of light, ruby and dark ales, as well as a variety of foreign beers, ciders and perries.

The Great British Beer Festival Winter runs from 20-24 February at the Halls in Norwich, and is complimented by a number of local events taking place throughout the month as part of the “Fringe”. More than 20 local pubs have planned events including food and drink pairings, tap takeovers, quizzes, and a Treasure Trail, providing the perfect opportunity to explore the city and celebrate Norwich’s beer and pub culture.