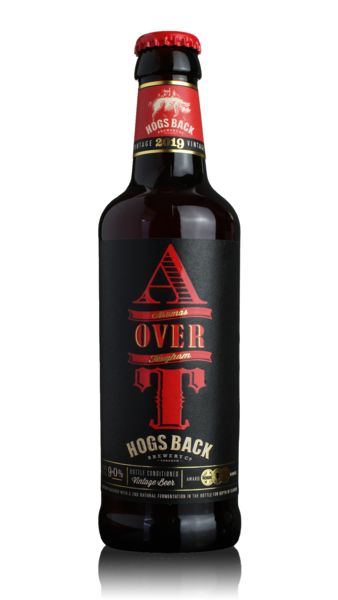 A over T from Hogs Back Brewery, near Farnham, Surrey, has been crowned the Champion Bottled Beer of Britain in CAMRA’s prestigious award, recognising the best bottle-conditioned real ale in the country.

A over T is a rich, complex barley wine, and has been awarded the Gold Prize. Hogs Back brewery is a family-owned brewery in the village of Tongham, in the heart of the old Surrey hop-growing region.

Hogs Back’s owner and Managing Director Rupert Thompson said: “We’re delighted that A over T, our ‘cask in a bottle’, is CAMRA’s Champion Bottled Beer this year. It’s very fitting that a strong ale wins the accolade after a year in which both brewers and pubs have had to call on our strength and resilience to get through. A over T’s loyal drinkers, including our friends from the local CAMRA branch, are always keen to try the newest vintage.”

According to the judging panel chair Cheryl Cade, A over T won due to its rich, complex taste, and a gentle bitterness that made it a very enjoyable beer to drink. It has a deep mahogany colour and a pleasant aroma of sherry. The judges were impressed by how well the alcohol had been balanced with a level of bitterness, and all agreed if they were asked to provide an example of a Barley Wine this beer matched every element.

CAMRA’s National Director responsible for the competition, Gary Timmins, said: “Congratulations to Hogs Back for winning the Champion Bottled Beer of Britain award, one of the highest accolades in the beer world. This is the first time CAMRA has conducted any judging virtually. Although the judges missed the personal contact, they were delighted with the quality of the beer. The process went very smoothly with all beers tasted blind, and we can definitely say that A over T won fairly and squarely!”

Judge Cheryl Cade added: “Overall the judges were very impressed with the quality of the beers in this year’s competition. They were all of an exceptional standard and showed the brewers skill at their best. It was a very close competition and all the finalists should be celebrated. These are all beers that we will be seeking out in the future and would recommend to anyone”.

CAMRA will also be sharing a limited-edition Good Beer Box featuring the three winners of the Champion Bottled Beer of Britain award, plus three other finalists. Purchase will also grant access to a live online tasting event on 4 July 2021 with the brewers of the beers, hosted by beer expert Christine Cryne. Pre-order is now available on the CAMRA shop, £35 for members (£40 for non-members): https://shop1.camra.org.uk/product/beer-box-champion-bottled-beers/