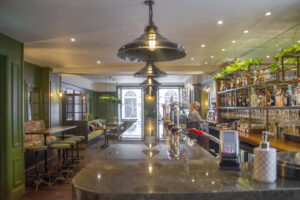 A historic Dorchester’s pub which has been a feature of the town’s high street for over 300 years has been named winner in the Refurbishment category of CAMRA’s highly acclaimed Pub Design Awards, organised by the Campaign for Real Ale.

The King’s Arms in Dorchester, Dorset has accommodated many important visitors, as well as featuring in the novels of Thomas Hardy. It had been closed for some time and was in a very poor condition when acquired by its current owners, the Stay Original Company, in 2016.

The major refurbishment, which has seen careful repair and conservation of historic fixtures and fittings, and careful integration of new ones, was led by interior design team Origin, in conjunction with architects Mackenzie Wheeler (conservation). The building has been carefully and sympathetically updated and has made a major contribution to the revival of Dorchester’s historic High Street.

Rob Greacen, MD of the Stay Original Co said: “We are delighted to have won CAMRA’s Pub Design Award for Refurbishment. It’s lovely that the outstanding work of the team – led by designer Ali Guttridge – has been recognised.

“The King’s Arms means so much in Dorchester. It was the Grande Dame of the high street for many years and immortalised by Thomas Hardy. Sadly, it was in a very sorry state by the time we bought it and it was only when we started work, that we discovered some amazing original features that we have brought back to life. Now you can trace the building’s evolution from 17th century ale house to important 19th century Coaching Inn and staging post to London.

“We specialise in rejuvenating important listed hotels and pubs in the South West and turning them in to thriving businesses again. It has been a pleasure to work on this project and we hope that the King’s Arms is back where it belongs as the go-to hotel in Dorset’s county town.”