GBBF at Your Local kicks off this weekend… let’s get back to the pub today! 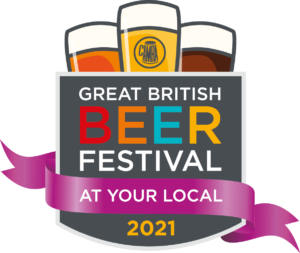 The Campaign for Real Ale (CAMRA) is encouraging beer and pub lovers across the UK to get back to the pub this summer with its Great British Beer Festival at Your Local initiative, taking place between 30 July to 8 August.

In the absence of an in-person Great British Beer Festival (GBBF) event this year, CAMRA wants beer, cider and pub lovers to come together to support the UK venues that have struggled throughout lockdowns and restrictions for over a year.

Under the GBBF at Your Local umbrella, pubs and breweries up and down the country are holding events to encourage all pub lovers back to the pub, to celebrate our nation’s great pubs and breweries, and live beer and cider.

Some of the great events taking place include:

All events are listed on the GBBF at Your Local website: local.gbbf.org.uk/whats-on/

The Great Northern in St Albans said: “GBBF at your Local is a great way to help pubs that have been hit by the pandemic. With the postponement and cancellation of hundreds of beer festivals up and down the country including GBBF, this is the perfect platform to keep in touch with what’s going on locally, and supporting us pubs, when we need it most!”

Ivan from The Walnut said: “The FemAle festival is intended to showcase how many women are involved in making great beer at the moment. All seven of our craft beer taps will have a beer from a different brewery with a female influence. From local breweries such as Little Earth Project and Burnt Mill to ones further afield such as Wild Card and Queer Brewing.”

Gemma Jones, owner of The Brit Pub, Port Talbot said: “We’re welcoming the local community back to The Brit Pub this summer season with our GBBF at Your Local mini beer festival. We’ll be celebrating with live music, and local real ales and cider including the full range of Austringer Cider, produced by a local father and daughter team, and meet the brewer sessions with Grey Trees Brewery from nearby Aberdare.”

GBBF at Your Local is running various competitions throughout the event, including giveaways of tickets to the Great British Beer Festival 2022. The GBBF at Your Local team will also be sharing   images of festivals and events on social media with the hashtags #GBBF #AtYourLocal.

Events are taking place throughout the month of August, and there is still time for venues to submit events to the GBBF at Your Local website. For further information about getting involved, visit https://local.gbbf.org.uk/ or email: GBBFlocal@gbbf.org.uk