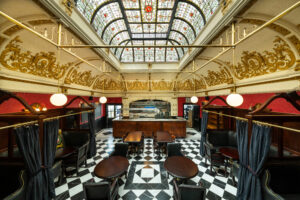 A former ‘gin palace’ in East Ham has been named winner in the Community Local category, which recognises street-corner locals as a focus for communities, in the highly acclaimed Pub Design Awards, organised by the Campaign for Real Ale.

The Boleyn Tavern in East Ham was an elaborate ‘gin palace’ built in 1899, which was long the venue for the pre-match pint for West Ham supporters on their way to the nearby ground. With the team moving away to a new home, the pub, like the surrounding area, went into decline. It had already lost much of its internal partitioning during the vogue for opening out pubs in the 1970s and 1980s, and was in a sorry state when purchased by the current owners, Remarkable Pubs Ltd.

Remarkable Pubs Ltd spent around 18 months, and around £1.5m, in lovingly overhauling the building, working with Anthony Clark of Clark Architecture. The original seven bars have been restored, with the recreation of the glazed partitions between them using traditional materials and techniques. Surviving features have been carefully repaired; the billiard room to the rear of the building, with its spectacular stained-glass skylight, is particularly impressive. This room is now used for dining, with an open kitchen incorporated against the back wall. An impressive building for a ‘street corner local’, the Boleyn is once again at the heart of the local community.