The latest pub closure figures from CAMRA reveal that 14 pubs are closing their doors each week, prompting the real ale consumer’s champion to renew calls for fundamental action to Save Our Pubs.

As the UK prepares to exit the European Union, the Government will have the freedom to reduce Beer Duty specifically in pubs – levelling the playing field between the price of beer sold in social, community settings and cheap supermarket alcohol consumed at home.

This move is one of three key measures CAMRA believes the Government needs to take urgently to halt the tide of pub closures. The Campaign is also calling for full reviews both of the Business Rates System to fix the unfair amount pubs pay, and of currently ineffective legislation designed to enable pub tenants to get a fair deal from their big-business property owners – both moves the Government has promised but is yet to carry out.

The number of pub closures has dropped slightly from a rate of 18 a week last year, thanks in part to CAMRA’s success in achieving new local planning protection for pubs in England. But the figure remains far too high and without swift action, it is unlikely that many of them will ever reopen.

Jackie Parker, CAMRA’s National Chairman said: “Pubs are a very important part of our national culture and are valuable community assets which help to combat loneliness and social isolation. It’s great we have seen a drop in the number of pubs closing, showing that our hard-fought campaign to get planning protection for pubs was worth it.

“Protecting pubs in the English planning system was a necessity and a welcome move from the Government. However, it’s taken nearly two years for the trickle-down effects of the planning changes to show. Our politicians should back the asks of the Save Our Pubs Campaign in full, and show they are squarely behind pubs.” 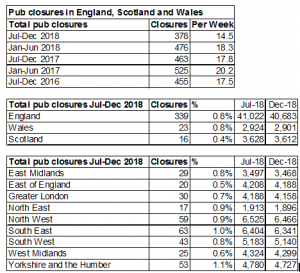