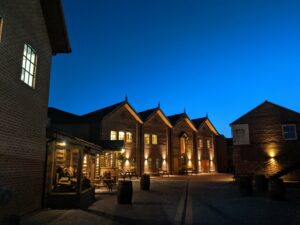 After a gap of some 40 years, the name of Joule’s has returned to the town, and to a site close to where its predecessor brewed until the 1970s. The company, working with architect Jim Entwistle of Bleazard and Galletta, have taken their inspiration from historic canal side warehouses.

The new taphouse is a robust building, built of traditional brick, making much use of reclaimed materials and fittings in the interior fit-out. The large central hall continues the warehouse theme, with smaller, more intimate spaces opening off it with a more ‘pubby’ feel. An impressive staircase leads up to a first-floor function room and will eventually give access to a space which is being fitted up as a theatre.

Phillipa Machin, Marketing Manager at Joule’s Brewery said: We are thrilled that CAMRA and English Heritage has recognised Crown Wharf for its vision, ambition, and pub design. The project is the culmination of over years in planning and design.

“The pub celebrates all that is Joule’s – our story, our commitment to our community-driven pubs, and our passion for real pubs and pub culture, which is unique throughout the world.  We couldn’t be more delighted that the judges have singled out Crown Wharf as one the best example of pub design in the UK, and it is a great honour to receive such a prestigious and rarely awarded prize.”