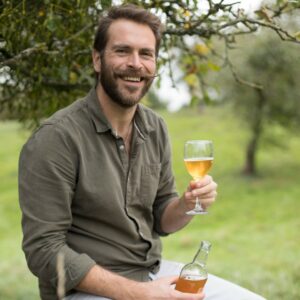 CAMRA’s prestigious Campaigner of the Year award puts a face and a personality to campaigning for real ale, cider, perry, pubs or clubs and is given annually in recognition of exceptional and inspirational activism.

Gabe Cook, the Ciderologist, has been awarded CAMRA’s top campaigning award at the organisation’s Members Weekend and Conference for his activism supporting and promoting cider and cider makers.

CAMRA’s Campaigner of the Year award has never been awarded to a cider campaigner before, making this a first for CAMRA. Gabe’s nomination spoke of his long list of achievements.

As well as being a CAMRA author, podcaster, and a regular on national television, Gabe has worked closely with cider specialists and CAMRA’s Campaigns Team and volunteers to lobby government for a progressive system of taxation for small cider makers, and for an increase in the minimum juice content for cider. In addition, his training of pommeliers (qualified cider tasters), online tastings, and work to champion cider and perry within the industry and to consumers mean that Gabe has been front and centre in cider campaigning.

“It’s a pleasure to formally recognise Gabe’s hard work and dedication to the cider cause. He is a tireless campaigner and his endless enthusiasm for cider and perry, and work throughout the last year, has been exceptional.

“He is a well-deserved winner of Campaigner of the Year and I know that both CAMRA staff and volunteers have found partnering with Gabe a fantastic experience, despite the difficult circumstances of the pandemic.”