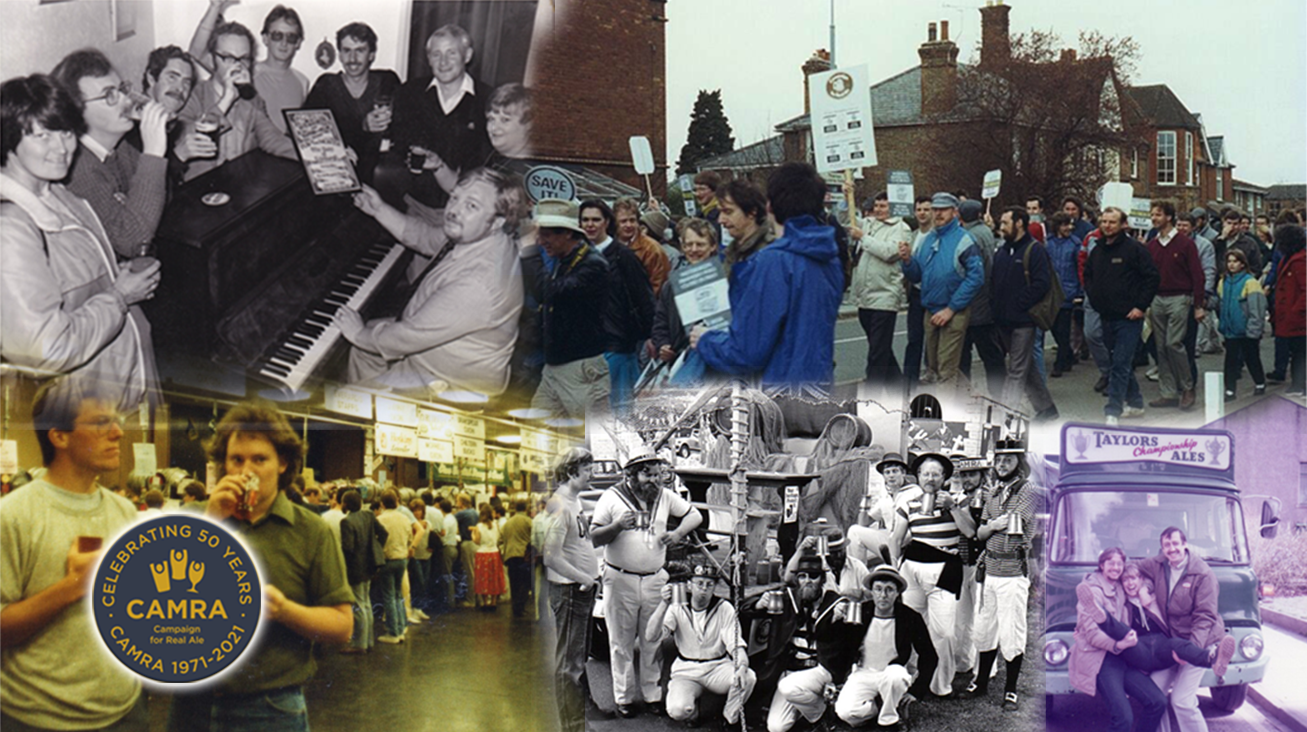 The Campaign for Real Ale (CAMRA) is releasing 10 more ‘behind the scenes’ insights from key moments in its history, as the organisation continues celebrating its 50th anniversary in 2021.

This is the second release in a series of first-hand accounts from behind the scenes of CAMRA campaigns, told by the people leading the charge at the time. The testimonials look back on some of CAMRA’s earliest victories, go behind the scenes of key moments in the Campaign’s evolution, and cover right up to the present day – including moments such as campaigning for the Tied Pubs (Scotland) Bill, which became law just last month, and insight from industry stalwarts such as beer writer Roger Protz.

Nik Antona, CAMRA National Chairman, said: “Over 50 years of campaigning, CAMRA has made its mark in the industry and in the halls of Westminster, from campaigning for licensing reforms, to establishing the national Pub of the Year competition and helping to form the European Beer Consumers Union. It has been fascinating reading the recollections of these campaigners and the journeys they undertook with CAMRA to effect positive change, and I hope other readers enjoy learning about them too.

“This past year has been an unprecedented one for the pub and beer industry, and we are finally seeing the light at the end of the tunnel after a year of lockdowns and restrictions. While looking back on our milestones, we reaffirm our commitment to fighting for pubs and consumers now and in future and supporting the industry through the next few months and the end of this difficult time.”

The second batch of campaigns are listed below, including a short excerpt from the full accounts – which are available upon request:

1. Getting Social in a Pandemic – Gillian Hough, National Executive member and Chair of Real Ale, Cider and Perry Campaigns Committee

“Over the next 12 months, pubs and clubs closed, re-opened with restrictions and were told to shut again. Tens of thousands of businesses were not able to trade. Staff were furloughed. Grants were applied for (where possible). Keyworkers had to continue working.  None of us could relax as we used to.”

“Eventually, the campaign to support Scottish tied pubs was taken up by Neil Bibby using a Private Members’ Bill. This involved a lot of work by Neil and his team and lobbying by supporters of the tied pub side of the business. Several of our Scottish beer festivals made a stand available to gather petition signatures in support of the Bill.”

“Pub closures are a sad feature of modern life, and the pandemic gives us further cause to worry about the future of our precious locals. Ironically, we had recently turned the closures corner with the Office for National Statistics reporting that in 2019 the number of pubs and bars had actually increased slightly. Ten years ago, though, the picture was decidedly gloomy as an average of 18 pubs a week called time for ever.”

“In Eastbourne on 18th April 2009, I met with five people to agree a strategy for the setting up of an online version of the Good Beer Guide and an online pub guide. We didn’t know it at the time but that meeting of CAMRA staff and volunteers (including the Chief Executive and National Directors) set the foundation of what would become WhatPub and the Good Beer Guide app.”

“In the 1970s and 1980s, most pub bars were adorned with an array of keg fonts dispensing a variety of beers under carbon dioxide pressure. A number of independent brewers and many free houses had resisted the move to keg beers and kept hand pumps on the bars of their pubs to serve cask beers. Through the 1980s, as real ale regained popularity largely through the efforts of CAMRA, it became apparent that many licensees were actively misleading customers by displaying handpumps to serve keg beers, effectively cashing in on the real ale boom without actually serving the product.”

“The main work of the group over the years has been in encouraging branches, local authorities and various transport providers to produce ‘Ale Trail’ leaflets where pub goers are encouraged to use pubs along a bus or rail route, and using those local bus and rail services for moving from pub to pub. This encourages pub goers to go to rural pubs which many people wouldn’t realise are possible to visit by public transport, so bringing more users to the various transport services in those areas and encouraging higher footfall in many rural pubs.”

“I went to the launch at the Ind Coope brewery in Burton-on-Trent with two of the Campaign’s founder members, Michael Hardman and Graham Lees. We were sceptical that a company best known for Skol lager and Double Diamond keg beer could make decent cask ale, but we were bowled over by the beer, a symphony of rich malt and hops, which we sampled in the Roebuck pub across the road from the brewery.”

“In its monumental 501-page report on The Supply of Beer (1989), the Monopolies and Mergers Commission (M&MC) came to firm conclusions. Judging that the ‘market has become more concentrated’ with the six national brewers producing 75% of UK beer in 1989, up from 68% in 1967, the M&MC ‘unanimously concluded that a monopoly exists in favour of those brewers who own tied houses’ or use loans to force ‘free houses’ to take their beers.”

“At its 1988 Annual General Meeting (AGM), CAMRA passed a motion, proposed by Roger Protz and Barrie Pepper, to set up tasting panels. These would report annually in CAMRA’s Good Beer Guide (GBG) on the calibre of real ales and recommend those for deletion from the guide on grounds of ‘blandness and lack of quality and character’.”

“I remember my first pub lock-in. It was in a tiny two room backstreet boozer in Darwen, Lancashire. At the end of the lunchtime last orders bell we were ‘slipped the wink’ and asked if we’d like to go into the rear bar so any noise could not be heard from the street. This was in the late 1970’s. England’s licensing laws that meant pubs closed in the afternoon. Restrictions date back to the Licensing Act 1872; public houses had to close at midnight in towns and 11 o’clock in country areas and boroughs were given the option of becoming completely ‘dry’ i.e. banning all alcohol. There were a number of near riots when police tried to enforce closing hours.”

The full articles are available on request. For further information on the campaigns and about the authors – get in touch on press@camra.org.uk