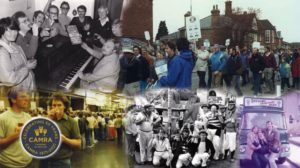 The Campaign for Real Ale (CAMRA) is releasing ‘behind the scenes’ insights from key moments in its history, as it prepares to celebrate its 50th anniversary on 16 March 2021.

Over 50 years of campaigning, CAMRA has made its mark in the industry and in the halls of Westminster, from campaigning for licensing reforms, to establishing the national Pub of the Year competition and helping to form the European Beer Consumers Union.

This is the first release in a series of first-hand accounts from behind the scenes of CAMRA campaigns, told by the people leading the charge at the time. The testimonials look back on some of CAMRA’s earliest victories, go behind the scenes of key moments in the Campaign’s evolution, and cover right up to the present day – including moments such as fighting against the takeaway beer ban imposed during the latest lockdown.

Nik Antona, CAMRA National Chairman, said: “As a campaigning organisation, there was no way we could properly mark this occasion without looking back at our campaigning over the last half century. We have come a long way from our start in 1971, and still have a long way to go – especially now, during one of the toughest periods on record for the pub and beer industry and after a year of lockdowns and restrictions. While looking back on our milestones during our anniversary year, we reaffirm our commitment to fighting for pubs and consumers now and in future, and supporting the industry through the next few months and the end of this difficult time.”

The first batch of campaigns are listed below, including a short excerpt from the full accounts:

The full articles are available on request, as well as any further information on the campaigns and about the authors – get in touch on press@camra.org.uk