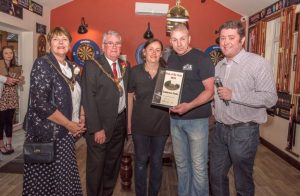 The Cricketers Arms in St Helens, Merseyside, has won the prestigious Pub of the Year title from the Campaign for Real Ale (CAMRA) just five years after it was boarded up for closure.

When owners Andy and Denise Evans took over the running of the pub in 2013, it was boarded up and hadn’t served cask ale since the 1980s. The Cricketers Arms is now a well-established local community pub with an excellent selection of 13 locally sourced cask ales and up to 20 ciders in the summer.

Alongside an impressive ale and cider range, plans are in the making for a microbrewery to open in the next few months and customers will be tasked with naming the pub’s beers. Visitors can also take part in a number of social nights including regular beer festivals, dominoes, jam nights, pub quizzes, karaoke and pool teams, as well as enjoy a new whiskey and gin bar.

“In less than five years, Andy and Denise have converted a boarded up pub on the brink of closure into a true destination pub for beer lovers across the country. What impressed me the most is that the Cricketers is a genuine community pub where people from all walks of life come together to socialise. It is a shining example of how a pub, which seems destined for closure, can have its fortunes turned around when in the right hands.”

Owner Andy Evans said: “We are over the moon to be named the top pub in the country after just a few short years of renovations. We’ve done everything we can to make this a welcoming community pub and still have exciting developments ahead of us. As well as expanding the beers available, we created a beer garden and put greens in the ground, and have big plans to install a microbrewery this year. We are very proud to be part of the cask ale scene and look forward to celebrating with our locals!”

Runners-up in the competition include the Wigan Central in Wigan, the Stanford Arms in Lowestoft and the Weavers Real Ale House in Kidderminster. Pubs in the competition are selected by CAMRA volunteers and judged on their atmosphere, decor, welcome, service, community focus and most importantly – quality of beer.

The Cricketers Arms will be presented with an award for its achievement at an event open to the press at 1pm on Wednesday 28th February 2018. This will be followed shortly afterwards by CAMRA’s Club of the Year presentation at the neighbouring Flixton Conservative Club at 6pm.