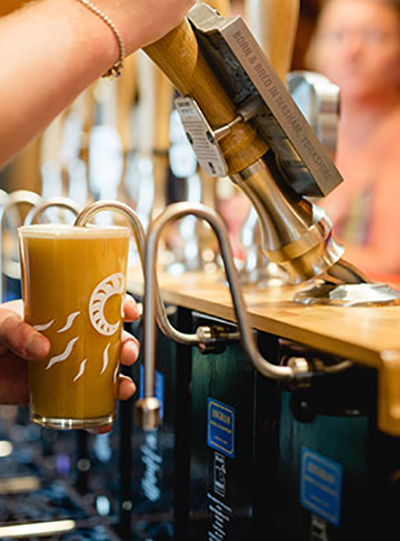 What is cask-conditioned beer?

For the first thirty years of CAMRA’s story, most of the better flavoured beer in the UK were the type of ‘real ale’ that is served from a type of barrel called a “cask”. While stored in a pub’s cellar, the beer inside these casks develops its character, or “condition”, for up to a week, thanks to the presence of live yeast in the beer.  It is then served without the injection of carbon dioxide gas.

This additional maturation should add elegance to the beer’s character, while the absence of gas injection makes its carbonation gentler.

Major efforts by CAMRA, including publicising the best outlets for such “cask-conditioned” beers and running hundreds of beer festivals each year that served them, promoted them ahead of the industrial brands that had come to dominate the UK beer trade in the late 20th century.

The term “real ale” became associated with beer served from a pub’s cellar via tall, hand-pulled pumps mounted on the bar, with the make of beer named on a clip attached around the narrowest part of the handle.  A few would be served directly from the cask, through a simple tap.

Like any artisan product, a cask-conditioned beer requires special handling and storage to be consumed at its best.  The cellar temperature needs to be fairly consistent and neither too hot or too cold; the cask should lie undisturbed and its keeping time respected; and the pipes through which it flows to the bar must be kept thoroughly clean. A cask-conditioned beer served in a British pub remains an essential part of British culture.

Learn more about casks and other forms of dispense containers here