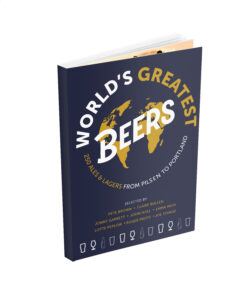 CAMRA has released its latest title World’s Greatest Beers – which showcases 250 of the best beers from around the world – ahead of International Beer Day on 5 August.

Compiled by eight award-winning authors, influencers, and industry experts, this is a collection of personally selected beers from across the globe that will excite, interest, and intrigue you.

As well as major producers in the UK, USA and Europe, this book explores some of the outer regions with examples of great beer from Japan, Australia, Kenya and South Africa.

A selection of beers from the latest title are available to sample at the Great British Beer Festival, taking place this week at Olympia London, including:

Illustrated in full colour throughout, this high-quality book is a must-have for all self-respecting beer lovers. It is available to order now from the CAMRA Shop retailing at £15.99 – visit: https://shop1.camra.org.uk/product/worlds-greatest-beers/

John is an award-winning journalist covering the beer industry. He’s the author of several books including Drink Beer, Think Beer: Getting to the Bottom of Every Pint and The American Craft Beer Cookbook. He is the co-host of Steal This Beer, a podcast. John has lectured on the culture and history of beer and judged beer competitions around the world.

Joe is a freelance journalist whose words and photos have appeared in the New York Times, Draft Magazine and All About Beer, among others. He is co-author (with Tim Webb) of the Good Beer Guide Belgium, 7th edition, and author of Around Brussels in 80 Beers.

Roger is a British writer, journalist and campaigner. He joined the Campaign for Real Ale in 1976 and has written award-winning books on beer, pubs and breweries and was the editor of CAMRA’s Good Beer Guide for many years.

Emma is a freelance writer, audio maker & podcast consultant based in the seaside city of Brighton, UK. Her award-winning work is centred around beer, cider, pubs and the wider drinks industry. She is also the Chair of the British Guild of Beer Writers.

Claire is a US-born, London-based writer, editor, self-taught cook and craft beer expert. She writes the popular Beer Lover’s Table blog for Hop Burns & Black and is the associate editor at GoodBeerHunting.com, a global authority on craft beer.

Jonny is a London-based beer writer, author, and filmmaker. As well as writing regularly for Good Beer Hunting, he is the founder of YouTube’s Craft Beer Channel. He has won several writing and broadcasting awards, including U.K. Beer Writer of the Year in 2019.

Pete is an English writer who has written extensively on the subject of beer and drinking cultures around the world. His latest book Beer by Design draws upon his experience in the copywriting and advertising world.