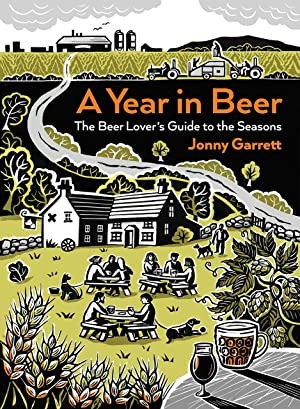 A Year in Beer: The Beer Lover’s Guide to the Seasons by Jonny Garrett won the Fortnum & Mason’s Drink Book of the Year 2022 last night. The CAMRA-published guide to seasonal drinking is a bold and exciting new look at beer which explores the UK’s modern brewing scene and deep dives into the histories and unlikely origins of our favourite styles.

Garrett leads readers through the hop and malt harvests of late summer, the joyful fireside drinks and slow cooking of autumn, the glut of Christmas beers and cheese boards of winter, and the wild and fresh burst of new life and brewing in spring.

A Year in Beer was shortlisted alongside Trouble Brewing in the Loire: The Braslou Biere Chronicles by Tommy Barnes, and The Oxford Companion to Spirits & Cocktails edited by David Wondrich with Noah Rothbaum and was announced as the winner of the category at the 10th annual awards event last night (12 May).

Jonny Garrett: “I’m absolutely blown away to win this award, especially for a book with such an unusual take on beer. Writing and researching A Year in Beer genuinely changed my perspective on brewing and beer culture, and I hope it inspires many more people to think and drink seasonally too.”

Jonny is a London-based beer writer, author, and filmmaker. As well as writing regularly for Good Beer Hunting, he is the founder of YouTube’s award-winning Craft Beer Channel. He has won several writing and broadcasting awards, including UK Beer Writer of the Year in 2019 from the British Guild of Beer Writing, and currently sits on the board of Directors for the Guild of Beer Writers. He also regularly publishes content about beer and brewing for CAMRA’s Learn & Discover platform.

A Year in Beer is available now for order, by visiting the CAMRA shop here.