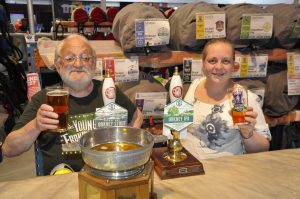 It’s the fifth time Swannay Brewery has won Champion Beer of Scotland after first taking the title in 2007 with Dark Munro, 2008 with Scapa Special, 2010 with Orkney Blast and 2012 with Orkney Best. Swannay was known as the Highland Brewery for much of that time.

The competition marks the first day of the Scottish Real Ale Festival, which is running from the 5th-7th of July at the Corn Exchange in Edinburgh.

Sarah Crawford, CAMRA’s Director for Scotland and Northern Ireland says: “Congratulations to Swannay Brewery for winning the Champion Beer of Scotland for the fifth time. This is the highest beer accolade in Scotland. The judges were particularly impressed with the balanced flavours and its drinkability. It truly is a beer for any occasion!”

Rob Hill, managing director at Swannay Brewery said: “We are over the moon to win the Champion Beer of Scotland award! We have been making Orkney IPA for eight or nine years is and it has just gone from strength to strength and regularly performs well in Scotland. It’s a good old mix of European hops with a handful of American hops added to provide some zestiness.”

This year’s silver award went to Black Isle Brewery’s Hibernator, a 7% ABV barley wine Orkney Brewery’s Red MacGregor, a 4% ABV bitter took third place. All three of the beers will be available to sample at the Scottish Real Ale Festival.